Apple iPhone 5s in Various Grades Depending on the Cosmetic Condition. Check Grading For More Info 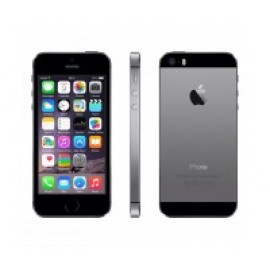 The iPhone 5S was premium addition to the Apple range of smartphones back in 2013 and requires a nano size sim card. Despite the latest iteration of the iPhone offering a lot more under the hood, there’s no denying that the iPhone 5S is something of a dark horse for those searching for a budget handset.

Powering the iPhone 5S is an Apple A7 CPU and 1GB RAM. The screen of the iPhone 5S measures in at a pocket-sized 4 inches, while photo junkies can still take high-quality photograph thanks to the inclusion of an 8MP rear camera as well as 1.2MP front-facing camera.

The iPhone 5S also includes a security feature that was introduced with the original version of the iPhone. Touch ID is an electronic fingerprint recognition system that is used for unlocking devices, as well as being used to purchase in the App Store and compatible apps.

The Design of the iPhone 5S

As well as introducing the Touch ID feature, the iPhone 5S is also the last iteration to bear the design that was synonymous of older iPhones, with new iteration choosing to employ rounder edges and making more use of the screen real estate.

Small additions have been made to the 5S when compared to the earlier iPhone 5 release These subtle but effective changes include a dual-LED flash and a redesigned Apple home button.

The iPhone 5S was also recognised at press events for it improve build quality which included an aluminium-base, making it much lighter than previous iterations of the handset. Charging of the handset is carried out via Lightning, making its debut with the iPhone 5S

Charging is carried out via the Lightning connection, and there are stereo speakers included which produce enough boost and bass for gaming and box set binges.

Why Consider Purchasing the iPhone 5S?

Given the many additions that Apple have made to the range of iPhone, many would be forgiven for thinking that there is little value to the iPhone 5S, but nothing could further from the truth.

Firstly, those looking for a premium Apple experience without having to invest a lot of money can do so with ease with the iPhone 5S.

Despite the handset not having some of the impressive specifications that later counterparts have offered, the iPhone 5S still offers a powerful and affordable handset that can offer a seamless user-experience that still holds up today.

Being an updated version of the iPhone 5, those how to purchase the iPhone 5S will find that the user interface and experience of the handset is improved when compared to the original handset. This is due to the inclusion of a 64-bit dual-core 1.3GHz processer, PowerVR G6430 GPU and an M7 co-processor.

When searching for a handset, the price alone should not be the determining factor. Many assume that only the most expensive handset will suit their needs, but many are surprised to find out how much value there is in earlier iPhone handsets.

In case your Apple iPhone 5s won't turn on, it's more than likely your battery has died and might need a simple a battery replacement. You can also try soft resetting it by pressing the home button and power button together for 10 seconds and see if that helps.

It is definitely worth buying thanks to Apple's excellent software optimization and durability. It can still handle daily task and you should go for it if you're not a power user and on a budget.